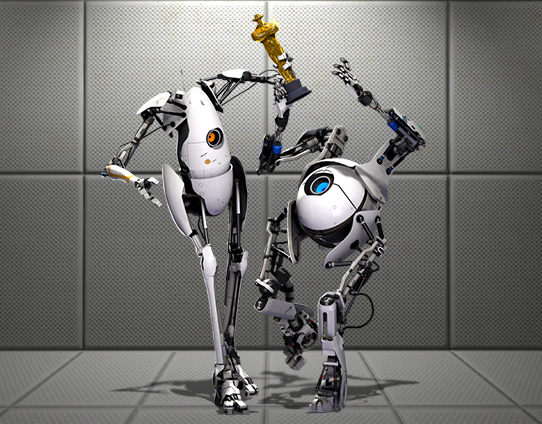 We were sitting around reminiscing about our favorite SFM videos, when we realized it's time to start this year's Saxxy Awards! We're still reeling from the great videos from last year, and are looking forward to even more!

One thing we'd especially like to see more of, is videos made in other universes. Since the Saxxy Awards started as a Team Fortress 2 video contest, and the SFM runs a modified version of TF2 itself, we've naturally seen mostly videos in that universe. We're hoping to change that by shipping assets from other games as optional DLC.

So starting today, you'll be able to download Portal assets directly in the SFM through the Portal Content Pack DLC! All the models, particles and sounds from Portal 2 will be included, but unfortunately the SFM isn't able to render the Portal-specific effects like light bridges, gels, or well, portals.

As exciting as that is, we're even more excited to be offering our first non-Valve content pack! Puny Human Games have offered up assets from Blade Symphony, their tactical sword fighting game, for you to use in your movies! You'll be able to download the assets they've provided in the Blade Symphony Content Pack DLC, and even submit images and videos to their community hub! See their Media Monetization Policy here.

So once again, get your entries ready! The submission deadline this year is September 24th, but don't wait until the last day to submit! You can submit a non-final version up to a week early, and we encourage you to do so, just to safeguard against network outages, computer problems, or getting the time zone conversion to Pacific time wrong. Full submission rules with complete dates and times are available here.